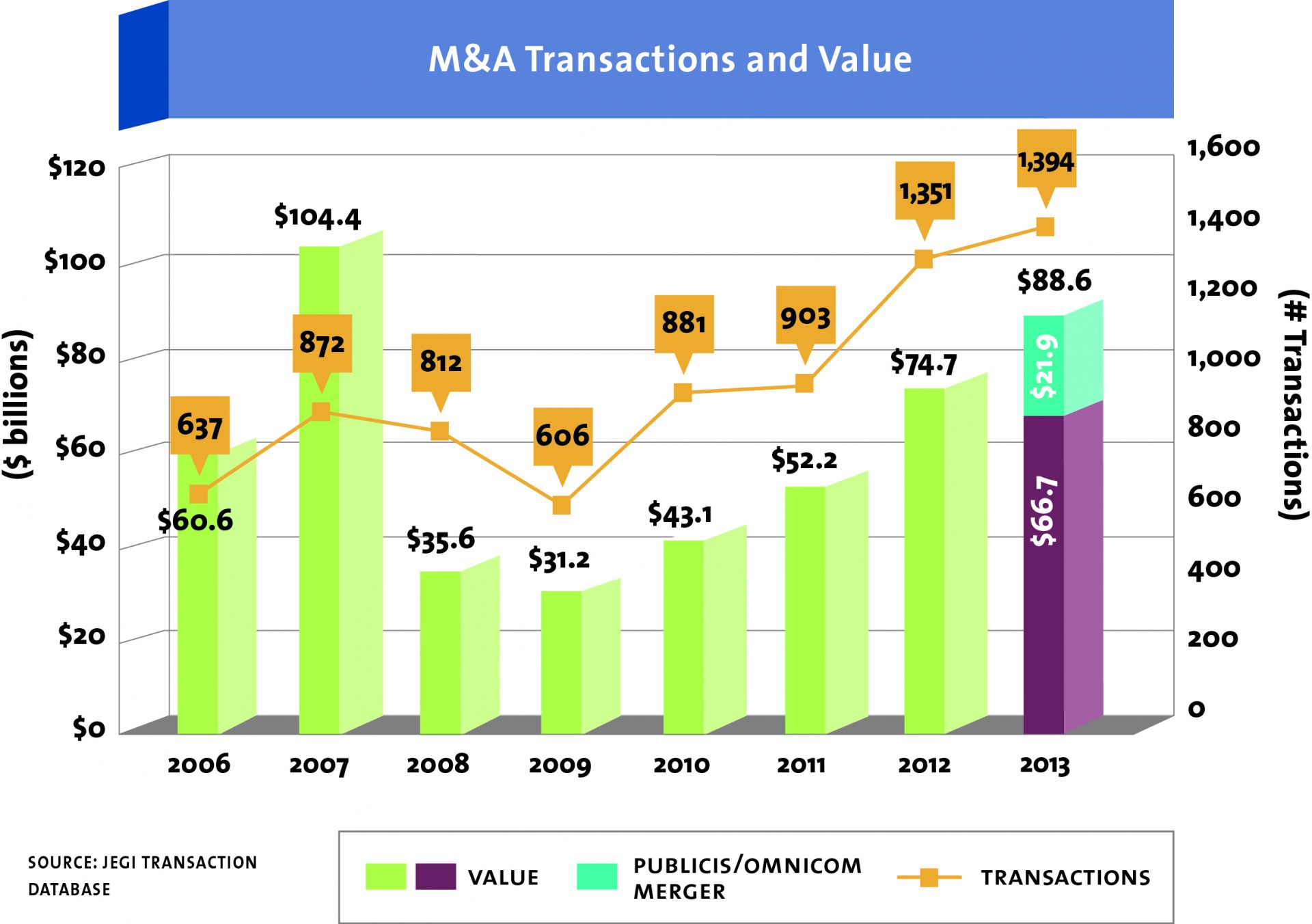 Marketing mergers and acquisitions in 2012 and 2013 told two different stories. In 2012, only two marketing industry mergers were above $1 billion (Dentsu/Aegis and Nielsen/Arbitron). In contrast, 2013 was about the big deals. Overall, the marketing sector in 2013 saw 479 transactions valued at $45.1 billion, according to JEGI’s 2013 M&A Report. Let’s look at a few of the most notable marketing acquisitions in 2013 and what they mean for the industry.

The value of this mega-merger represents nearly half of the marketing mergers and acquisitions done in 2013. Why would the 2nd and 3rd largest ad companies join forces? Some argue that as Ad conglomerates mature, profitable organic growth is harder to come by; so they rely on acquisitions.

Hasan Ramusevic of Hasan+Co voiced what the majority of spectators believe when he said that it’s “about power and status.”

ExactTarget is a leading email service provider that’s been growing rapidly for years and is paving the path that many will follow. What’s interesting about this acquisition is how SalesForce is using ExactTarget. Sometimes during an acquisition the acquired company is gobbled up and disappears without a trace. On the other hand, sometimes the acquired company is able to maintain their culture and brand. This strategy tends to restrict the ability to leverage both companies’ strengths.

Valassis is a marketing company best known for their distribution of coupon packets and “Have you seen me?” missing-children notices. Among its brands is RedPlum coupons. Harland Clarke Holdings Corp., is a leading provider of best-in-class integrated payment solutions and marketing services.

This deal won’t change much how Valassis operates but it will open up many new channels for Harland Clarke Holdings.

Responsys is a leading provider of enterprise-scale cloud-based B2C marketing software. It is widely believed across the marketing industry that this move was in direct response to SalesForce’s purchase of ExactTarget.

“This absolutely is a response to Salesforce,” says Forrester analyst Rob Brosnan “This is the battleground for the next ten years.”

Similar to the SalesForce/ExactTarget relationship, Responsys is expected to be the centerpiece of Oracle’s cloud marketing suite.

Staying with the theme of “marketing tech” companies in the CRM, email, marketing automation and related categories, Adobe acquired Neolane for $600 million. Similar to the strategy of Oracle and SalesForce, Neolane will be a core component of Adobe’s marketing cloud.

The past year had two main headlines:

This past year is evidence that email and CRM are hot again. Marketing Tech companies are cashing in.

What themes do you foresee in 2014? (tell us in the comments below)