Smart World is a compelling, but seemingly obscure business book. There are only 11 customer comments about it on amazon.com. The average rating is a 4.5 (out of five), with eight customers giving it a five star rating.

One of the Amazon customer comments we agree with wholeheartedly is that Smart World is not an “easy read”. In fact, it is one of the more difficult business books we’ve ever encountered. It is definitely not written for people who are used to (and prefer) executive summary-like business reading.

To be sure, Richard Ogle is an extremely smart man, or as he describes himself, an “independent scholar”. But his writing style is often dense. Take for example, his definition of the law of small-world networks:

“In a large scale-free (hub-dominated) network, the distance between any two nodes is small, typically less than six. While each additional hub potentially increases the total size of the network exponentially, increasing fitness (in the form of reciprocal relationships) will lead to the emergence of narrow, even uniquely defined worlds, thereby concretely specifying navigation pathways. Conversely, such worlds, once configured, expand rapidly as the law of the fit get rich is accelerated by closely linked hubs.”

Whew. One law, which encompasses three sentences and 76 words.

To his credit, Ogle also includes relevant stories to illustrate each of the nine laws of the new science of ideas. But in several instances they suffered from TMI (too much information), such as the 26 pages devoted to the discovery of DNA by Watson and Crick or the 14 pages devoted to the artist J. M. W. Turner. We admit we tended to skim through several of the illustrations, while working to learn the truths and conclusions they provided.

Please understand, however, that we found this book quite worthwhile. It absolutely fulfills the promise of the back flap cover copy, which says “Insightful and compelling, Smart World will forever transform the way we think about creativity and innovation.” Just expect to devote a considerable amount of time reading (and re-reading) the 263 pages in Smart World.

Get the full review here. 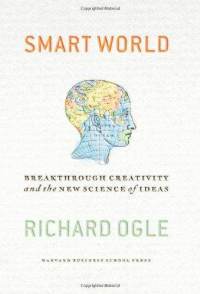