Predictably Irrational is a New York Times Book Review Notable Book of the Year. It was written by Dan Ariely, who holds dual Ph.D.’s in cognitive psychology and business administration and is the James B. Duke Professor of Psychology and Behavioral Economics at Duke University. The book was written while Ariely was a fellow at the Institute for Advanced Study at Princeton. Originally published in 2008, the book was republished in 2009 as a revised and expanded edition.

The works stems from Ariely’s extensive research and his experiences from a serious accident, resulting in burns to 70% of his body. His experiences with both successful and unsuccessful treatments became the genesis for his interest in how our minds impact our perceptions, experiences and the choices we make.

Get the full review here. 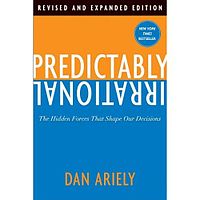