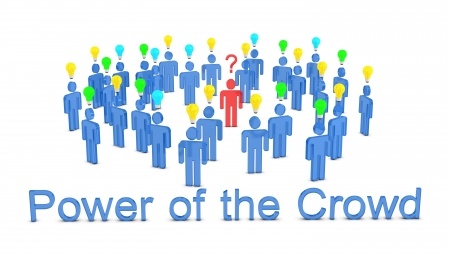 Naming the “Power of the Crowd”

Over the past 10 years the term crowdsourcing has increased in popularity. More people use that term each and every day. In the past 5 years we’ve seen the rise of a new term, “co-creation”, which is often used interchangeably with crowdsourcing. Through my time working in the “co-creation” space and the multitude of conversations I’ve had with industry experts I’ve noticed one big theme; people are unclear about the differences between crowdsourcing and co-creation (if there is any difference at all). I ask 10 different people and I get 10 different answers. Today we’ll explore the meaning of each term, how they’re related, and how they differ.

Chaordix: “Crowdsourcing invites crowds to submit, discuss, refine and rank ideas or other contributions via the web to arrive at what have been proven economically as the most-likely-to-succeed solutions.”

The term “crowdsourcing” was coined by Jeff Howe and Mark Robinson and published in a June 2006 Wired magazine article “The Rise of Crowdsourcing.”

Inside the article Howe and Robinson define crowdsourcing like this:

“Simply defined, crowdsourcing represents the act of a company or institution taking a function once performed by employees and outsourcing it to an undefined (and generally large) network of people in the form of an open call. This can take the form of peer-production (when the job is performed collaboratively), but is also often undertaken by sole individuals. The crucial prerequisite is the use of the open call format and the large network of potential laborers.”

Author, James Surowiecki, did a good job of explaining the reasoning behind the crowdsourcing movement in his book The Wisdom of Crowds. In his book he goes on to explain that the process of taking into account the collective opinion of a group of individuals rather than a single expert, has proven to be of greater value.

“The act of involving consumers directly, and in some cases repeatedly, in the product creation or innovation process. Companies engage with consumers on initial product concepts and ideas, and they use consumers as a resource throughout the product development life cycle.” (Doug Williams, Forrester Research)

In their paper, A Typology of Customer Co-Creation in the Innovation Process, Frank T. Piller, Christoph Ihl, Alexander Vossen describe co-creation like this:

“Customer co-creation is an active, creative and social process, based on collaboration between producers (retailers) and users, that is initiated by the firm to generate value for customers” (Piller, Ihl & Vossen – 2010)

Do both definitions of crowdsourcing and co-creation sound very similar to you? Well it’s because they do have many common threads.

Crowdsourcing and Co-Creation are at the heart of the open-source-software movement, where users have full access to the source code and are empowered to make their own changes and improvements to it. They both rely on the participation and expertise of the crowd.

So are they the same thing?

Doing a quick Google Analytics analysis on the level of search activity for the two terms, the searches for Crowdsourcing exceed those for Co-Creation by a margin of nearly 10 to 1. And this ratio has stayed consistent for the past three years.

Ok, so crowdsourcing is the more frequently used term, but that still doesn’t explain their differences….

I think the following three quotes help form the differences between crowdsourcing and co-creation.

“Co-creation is the difference between people creating a great idea for you and people working with you to make a good idea great. It works because even the greatest creative rarely knows the complete answer – usually they know part of it or have a hunch. Someone somewhere probably knows another part of the solution, and so on, until a complete picture appears. By collaborating, we get to the solution quicker, and often with more elegance.” (The Guardian 2013)

“Simply put, you can crowdsource without co-creating, but you cannot collaborate and co-create with a community without ultimately crowdsourcing. The very nature of co-creation implies trusting the wisdom of the crowd – their mass, experience, sentiment and knowledge being greater than your own. Crowdsourcing is a call to the crowds to contribute, co-creation invites the crowds to go one step further and innovate.” (Chaordix, 2010)

The notion of long-term involvement is also important in co-creation. As Promise Corp’s whitepaper about co-creation says, “the aim of co-creation is to enhance organizational knowledge processes by involving the customer in the creation of meaning and value“.

I think these quotes help us distinguish two key differences:

I heard a son ask his dad recently, “Dad, don’t you think it’s awesome we can Google something and find out the answer to any question within seconds?” The dad responded by saying, “Not really because I think people now know a little about a lot versus knowing a lot about a little.”

2) Crowdsourcing is a subset of co-creation

I had a recent conversation with Yannig Roth and he described it this way:

“I think you can compare it to democracy and its “operationalizations.” Co-creation is like democracy, a big idea in which many people believe for its virtues. Crowdsourcing is a way to co-create, like there are different types of democracies (representative, parliamentary, presidential…)”

I think as a whole, we accepted the initial premise of crowdsourcing because it makes sense, but I think over time we’ve realized it goes far beyond. We’re opening our eyes to the bigger picture, co-creation.

Do you agree with my differentiation of crowdsourcing and co-creation? Let me know in the comments below!